Wayne Gretzky -What Hockey and Humour Have in Common

This past year, I signed up for the online learning course Masterclass.

Then there was Wayne Gretzky.

I knew Wayne was The Great One. Please, I’m Canadian.

Hockey is part of our heritage.

I was surprised by Wayne’s presentation because yes, he did speak about hockey but his takeaways could apply to anybody. Even a comedian!

Wayne talked about the power of routine, practice, anticipation, goal setting, having a mentor, having various outside interests and hobbies, keeping your head in the game and perhaps, most importantly, the power of play. Creativity. The importance of not getting locked into structure and a system too early. The need for young players (and comedians) to just play, have fun and have the freedom to discover their own unique skill set.

It was so obvious throughout Wayne’s Masterclass how much of an influence Walter, his dad, had over him.

Walter was a decent hockey player when he was younger, and Wayne’s mother was athletic. Wayne and his brothers and sister all played sports.

Wayne said that his dad built a hockey rink every year in the backyard of their Brantford, Ontario home. The neighbors wanted to know why Walter’s backyard was so green every summer. I guess they thought he was using a secret pesticide or formula. Wayne said it was probably from all the ice that melted in the spring!

Wayne said he loved skating on that ice every winter, from sunup to sundown and well into the dark. His passion and discipline helped him develop the skills that made him stand out in the sport at a very early age.

He worked on his accuracy by firing hockey pucks at a picnic table lying on its side with circled targets. Wayne said he sharpened his shot as a kid quickly because he hated walking in the snow and getting his feet wet while retrieving the pucks from the neighbor’s lawn.

Wayne’s skills developed quickly so he always ended up playing with older kids.

Walter told him that because he was smaller than his older rivals, Wayne would have to

to use his brain and skate with his ‘head up’ to anticipate the play, as well as to avoid injury.

This is where Walter came up with a unique exercise for Wayne.

As Wayne watched Hockey Night in Canada, Walter made him get a piece of paper and draw a rectangle. That rectangle represented the rink that Wayne was watching on TV. Walter told Wayne to watch where the puck was going and draw it on the paper without looking down. Afterwards, when Wayne looked down at the paper, he was able to see the patterns that the puck made during the game. He saw the areas that the puck travelled to most of the time. This later helped him develop a way to capitalize on those areas and helped him to score and set up many goals in the future.

Wayne is famous for the quote, “I skate to where to puck is going to be. Not where it has been.”

He followed the puck, not the players. He learned to anticipate the next play. Those hours and hours in front of the TV set following the path of the puck gave Wayne new ideas for scoring.

The thing that hockey and humour have in common.

Wayne says he is not a psychologist but so many times he sees coaches putting kids into a hockey ‘system’ too quickly. In his opinion, there is too much emphasis on structure and not enough emphasis on play.  He says this approach doesn’t allow young players to learn or think for themselves and thus develop their own style and creativity.

Comedy is similar. I see so many young comedians wanting to replicate somebody else’s writing style, cadence or physical mannerisms. In the worst cases, they actually steal another comedian’s material and do their jokes on stage! Of course, this is a major industry taboo.

I always say to my students: watch, study, and always write but, most of all, don’t forget to HAVE FUN. Play. Discover who you are on stage. Take the time to develop your own point of view.

This is comedy, after all. Don’t be so serious!

No matter who we are or where we come from, when we step out of our comfort zones and allow ourselves to have fun, we have a greater chance of discovering something new and wonderful.

You might not be the next Great One but you might be pretty good –The Pretty Good One! At the very least, you won’t know until you try.

Until next time, play, have fun and don’t forget to laugh long and prosper.

Feel free to take a listen!

Laugh Long and Prosper podcast on Spotify or Soundcloud 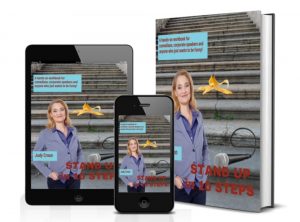